First of all, i've been using Garnier for about 3 years and i love this line. It soothes my face and getting rid of all the blemishes i had. I've been using the Lightening Series, it doesn't really lightening my face but so far i love this. 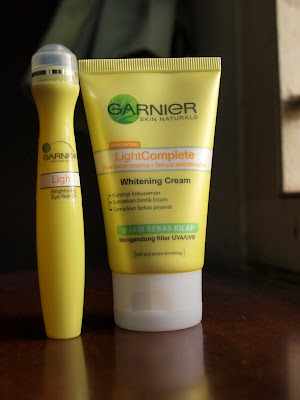 1. Brightening Eye Roll-On.
It's like clear liquidy consistency that glides on very smoothly through the roll-on top and gives me a cooling effect. Both the liquid and the roll-on thingy. I use this every morning and night after shower or after i clean my face, feels so nice on my lower lid. Just roll it once or twice on your dark circle, then gently dab it with your ring finger to give some extra massage. But sadly, it doesn't really remove my under eye. I've using it for a couple months but it stays the same. It's only reduce the tired looking eyes just a few minutes after using.

Verdict: I really love the cooling effect but i don't really find it any useful to me. So, definitely no repurchase.


2. Garnier Light Complete
A creamy consistensy at the beginning usage, but when it walking through the last drop, it eventually get drier, but still in a good consistensy to use. I love how Garnier's Products really take care of my skin really well. This day cream keeps my face soft and moist even though it should lightenig my face which its never did, but it's OK since I don't really need it. But the bad thing about it is that when you first apply it, it has some sheer white color on your face, still tolerable and for one or two hours it'll gone. For the oil control, I say it's just so-so. Sometimes i get oily much, sometimes I'm not.

Verdict: Love how it keeps my skin moist but don't like the sheer white coloring after usage. But still, it doesn't really matter. So it's a definite repurchase. :D
Labels: Garnier Review Skin Care