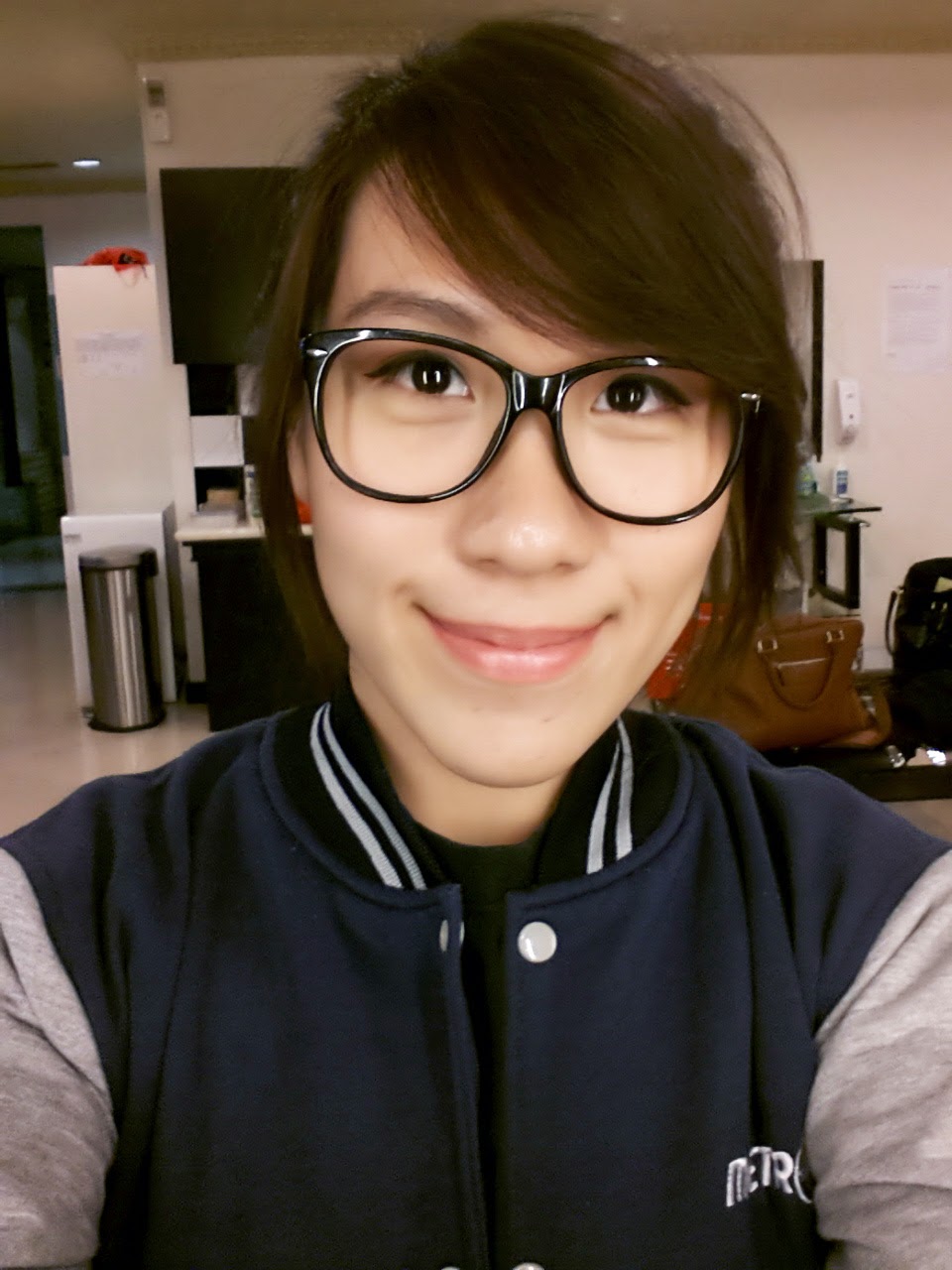 Remeniscing is addictive. On the times we go through a situation, we might not feel good about it, or it actually just a normal thing to do at the time, but when we grow up and look back, we crave to turn back the time, to feel those moment once again. Looking it back to the past and learn what people's intention and what people meant but we didn't understand back then, it's all suddenly become  clear and sometimes makes us feel like stupid. And that's the big part of the joy in it. Realizing the more we know, the more we don't know. After making my Muslimah by Sophie Paris Giveaway I can't stop thinking about my internship back at Metro Tv. It was fun & happy. I had a very great time while I work there. So, I guess I'll take you to look at a glimpse of my experience. 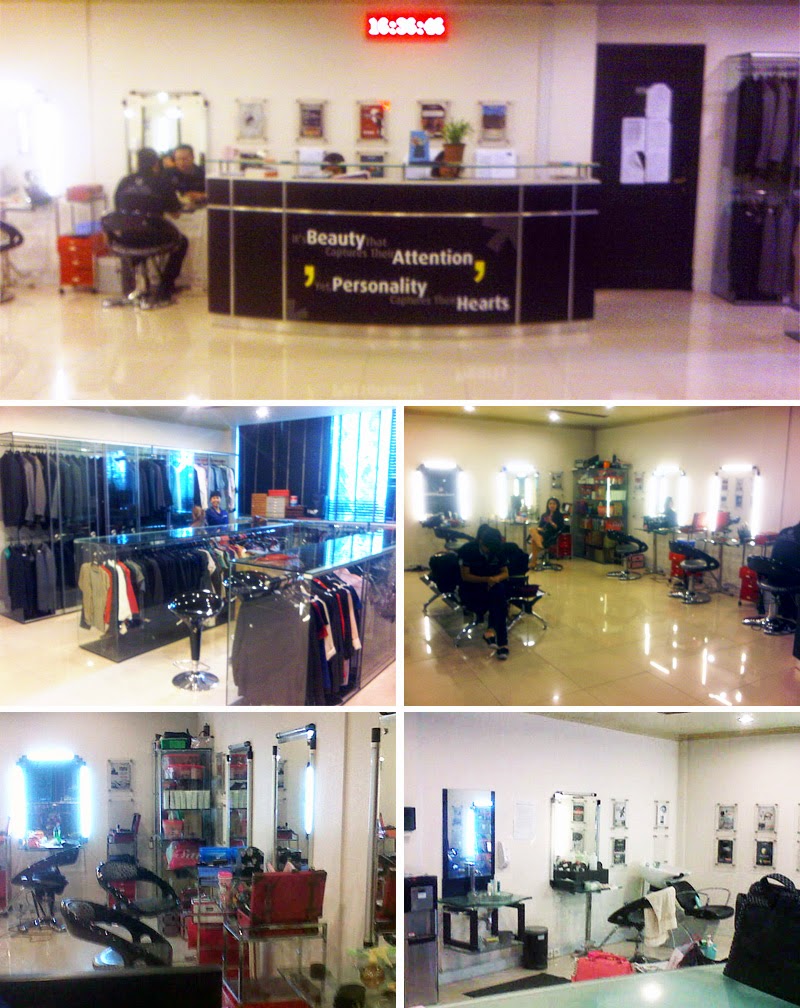 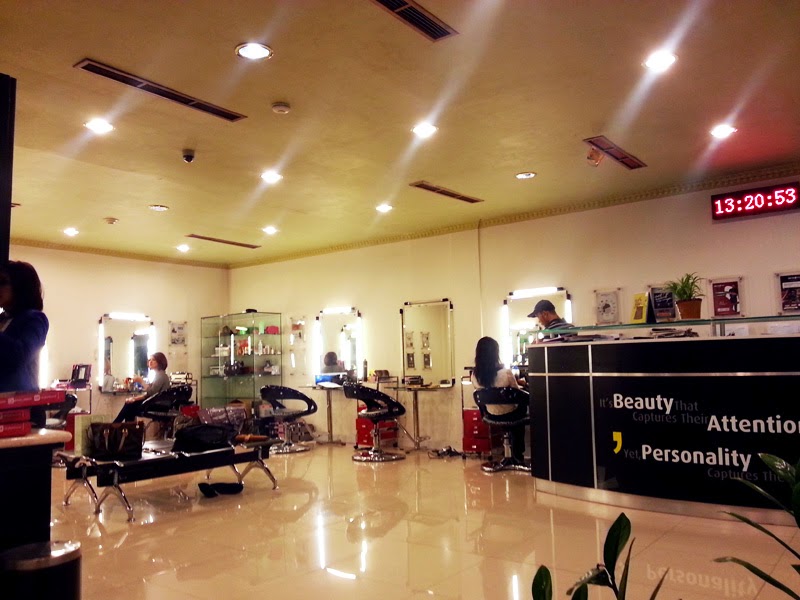 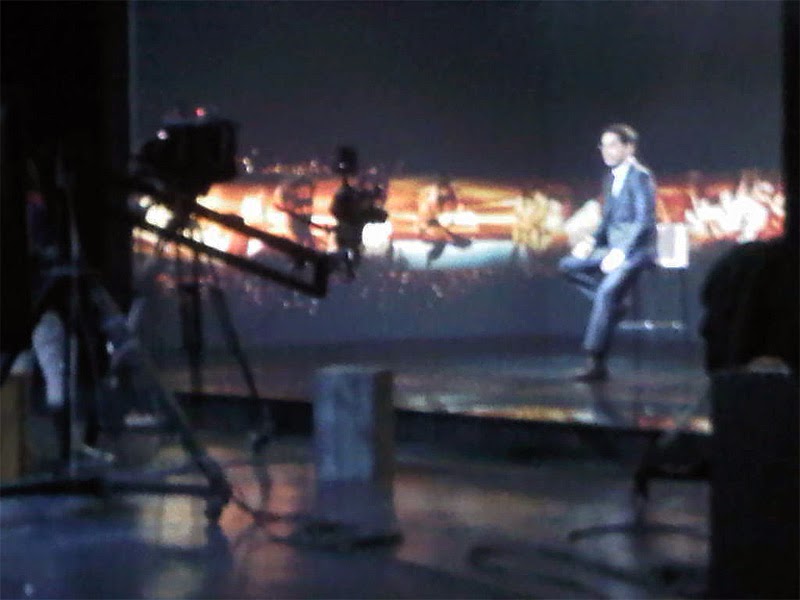 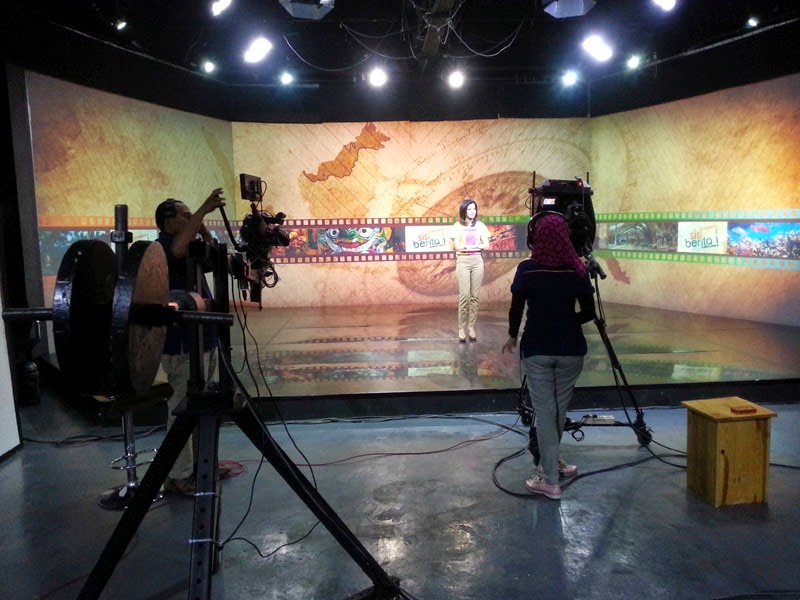 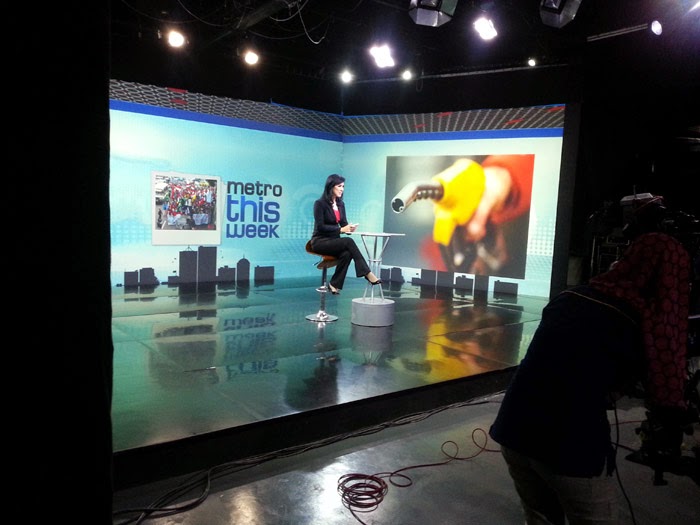 I spent most of my time back at the makeup room. The only thing I could do while waiting for someone to get their makeup done is to watch tv. Yep, you've guessed it, we can only watch Metro Tv to keep an eye to the anchor if they might need some touch up in between breaks. Sometimes I have to follow the news anchor to the studio they're taping in. Sometimes it's just across the makeup room, some other times it's  at the end of the furthest building they have. But I like being in studios rather than the makeup room. I don't talk much with the rest, simply because there's no one around that get my sarcastic jokes. Haha. At the studio I can sit calm & quietly while getting my job done. 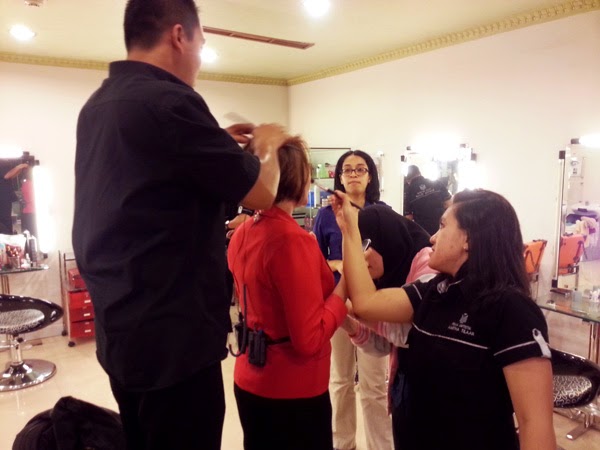 There were often happen like this when the anchor was about to get on air but she came late to the makeup room. All hands on board! When people are late he/she become the no. 1 priority. Haha. Funny times. If I never work in TV, I might never know things like this happens like all the time. Even in the pro surroundings. 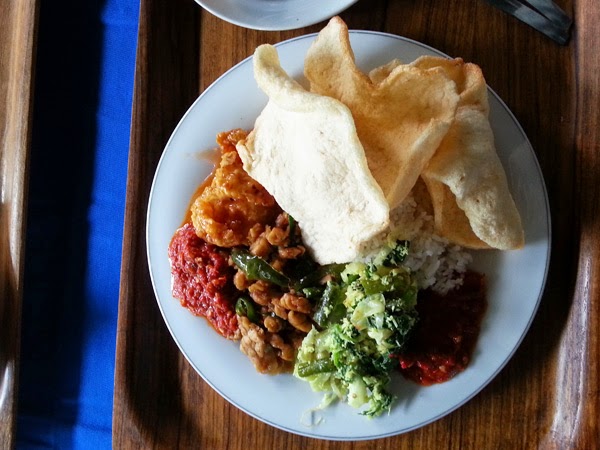 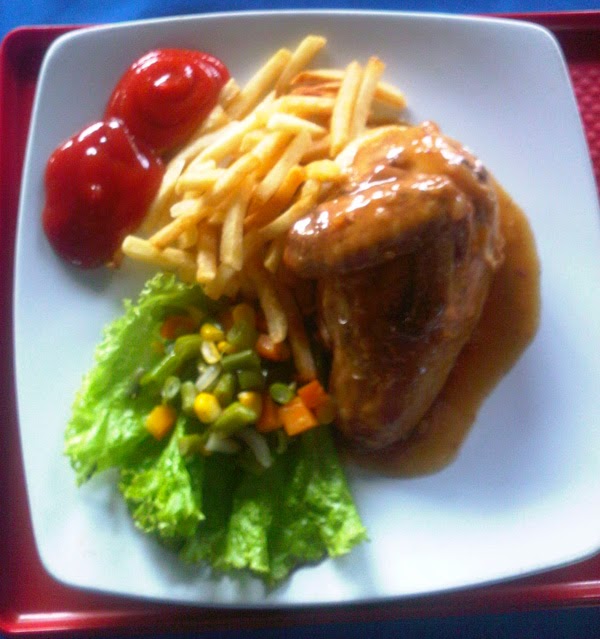 Lunch time was the most exciting time of my work days! Not only the food tastes great, but I can meet my uni/intern friends from different programs (at the time I did my internship, there's a lot of my uni friend who got in too) and we liked to exchange information and gossips which is so fun! XD 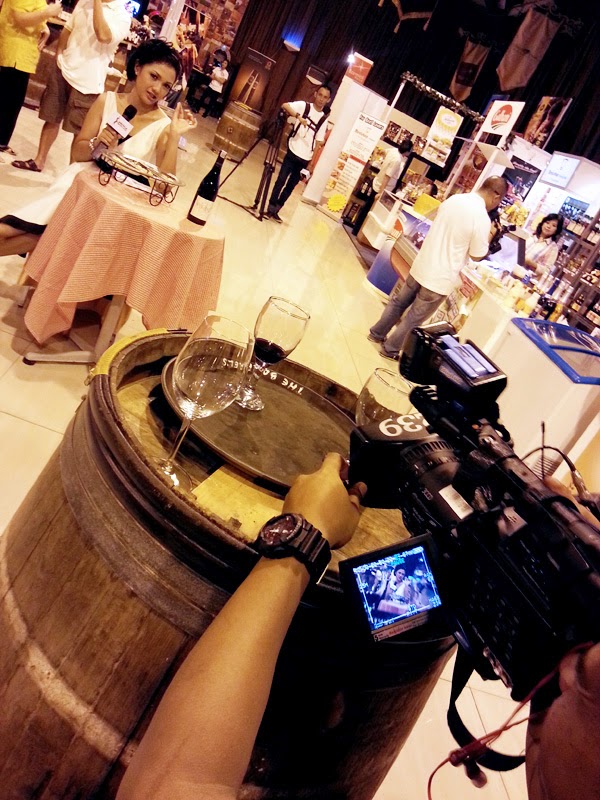 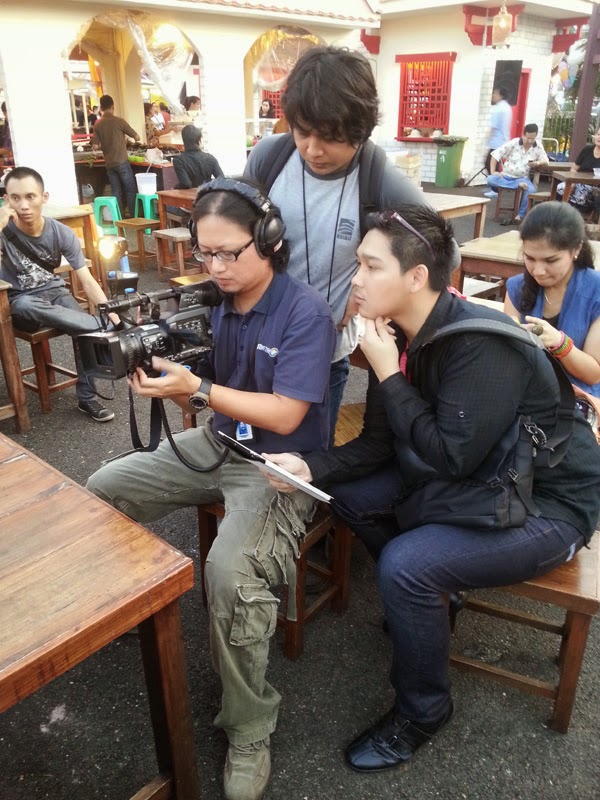 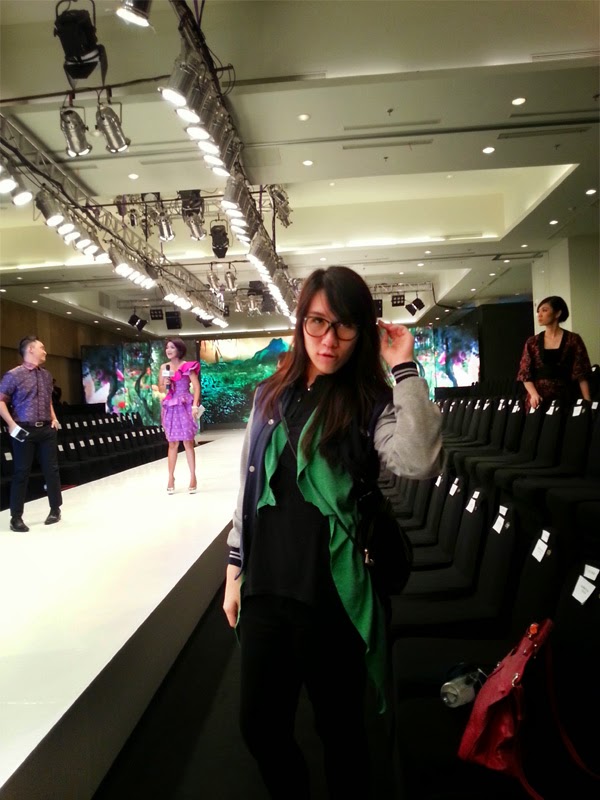 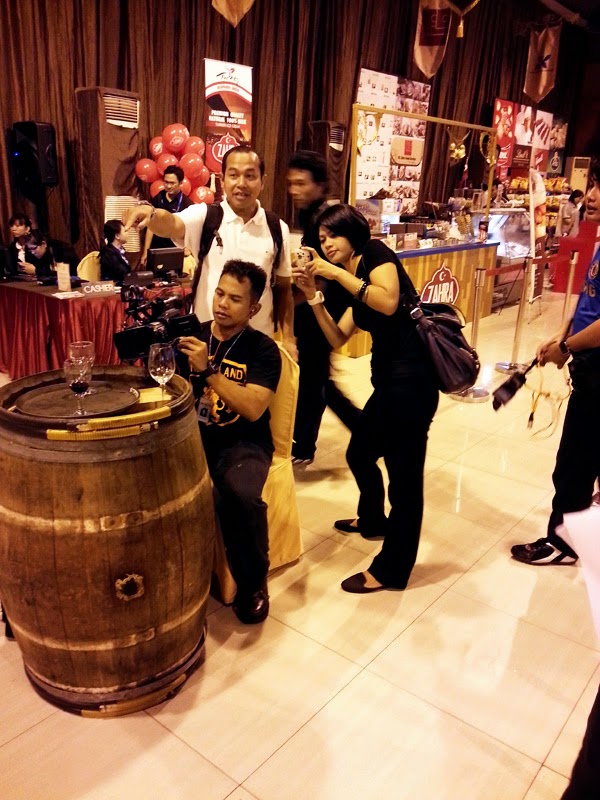 One of my uni friend was in a different division with me. Her division were doing projects from outside, like making commercials, doing some paid event coverage, and so on. So my friend suggest to her boss about me when they need a wardrobe + assistant for one of the project they had, and the boss said yes! Woohoo! I'm so happy back then, it feels like a Willy Wonka's Golden ticket for me to really experience the whole TV thing. The project was to make a 5 minute event covering per day for the Jakarta Fashion & Food Festivals at Mal Kelapa Gading. I work until late at night and sometimes starts very early in the morning. But it was super fun and I want to do it how many times more! The crew were all funny and crazy so they were really easy to get along with. 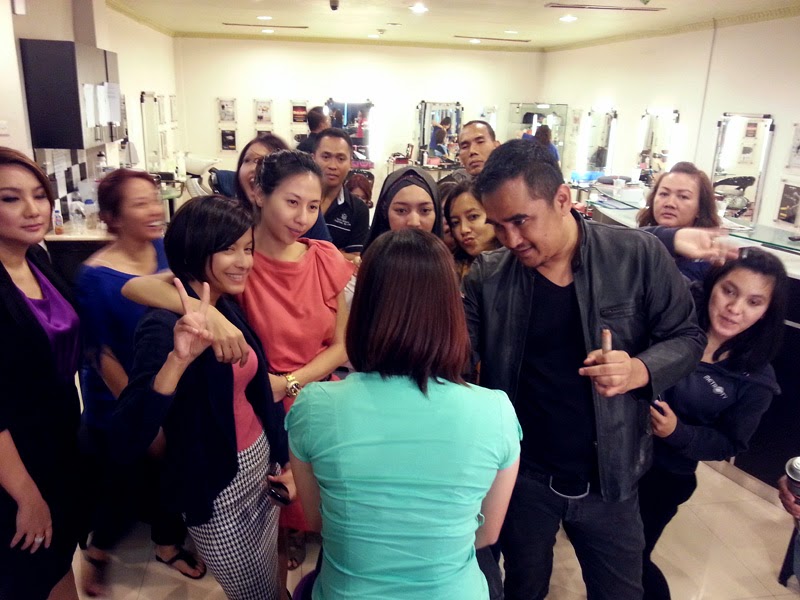 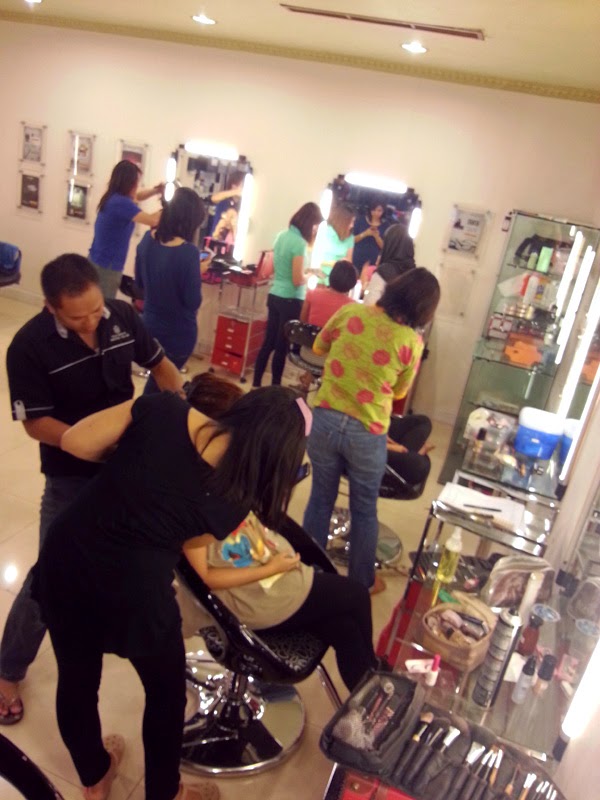 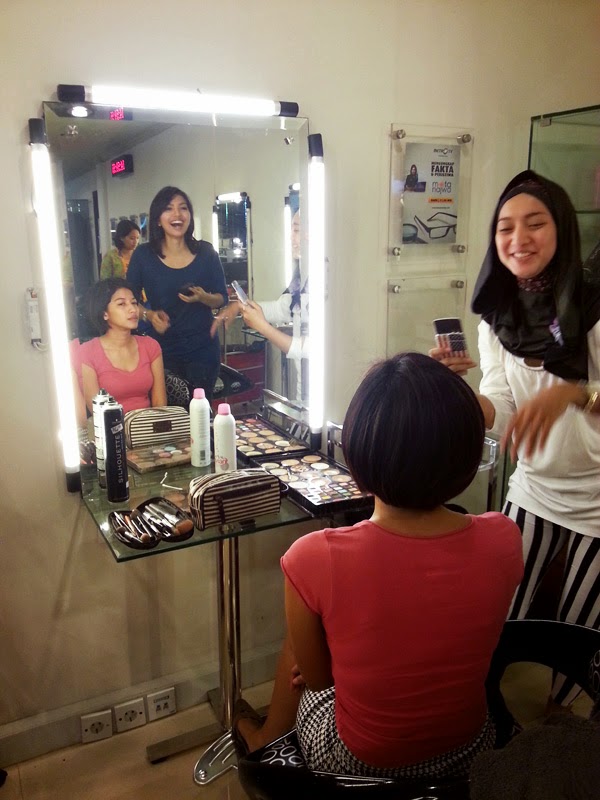 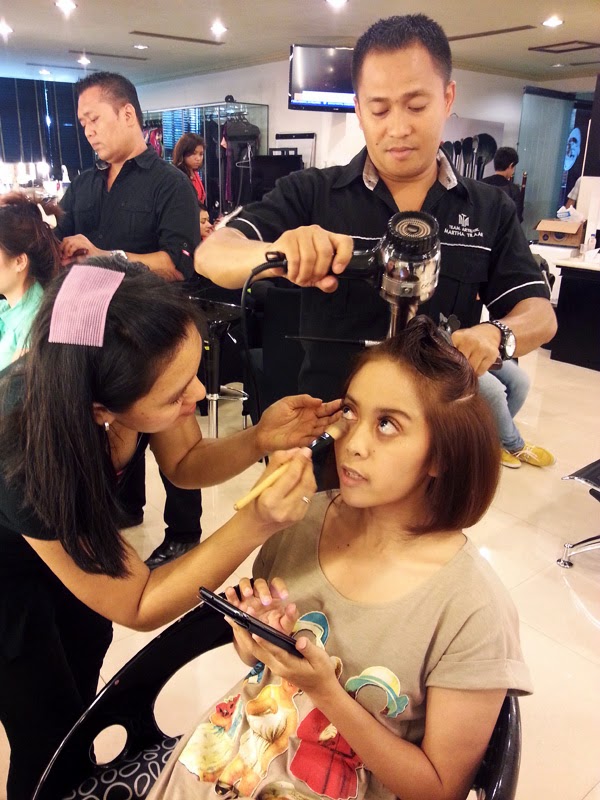 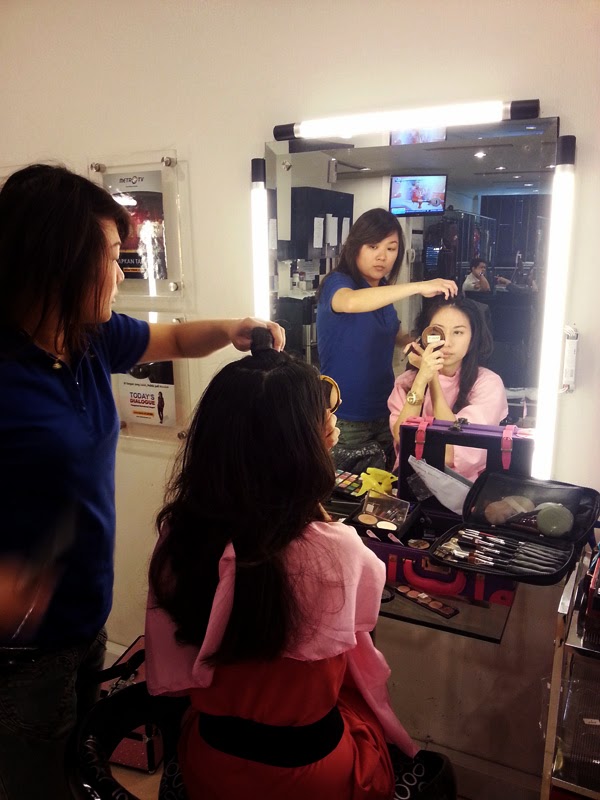 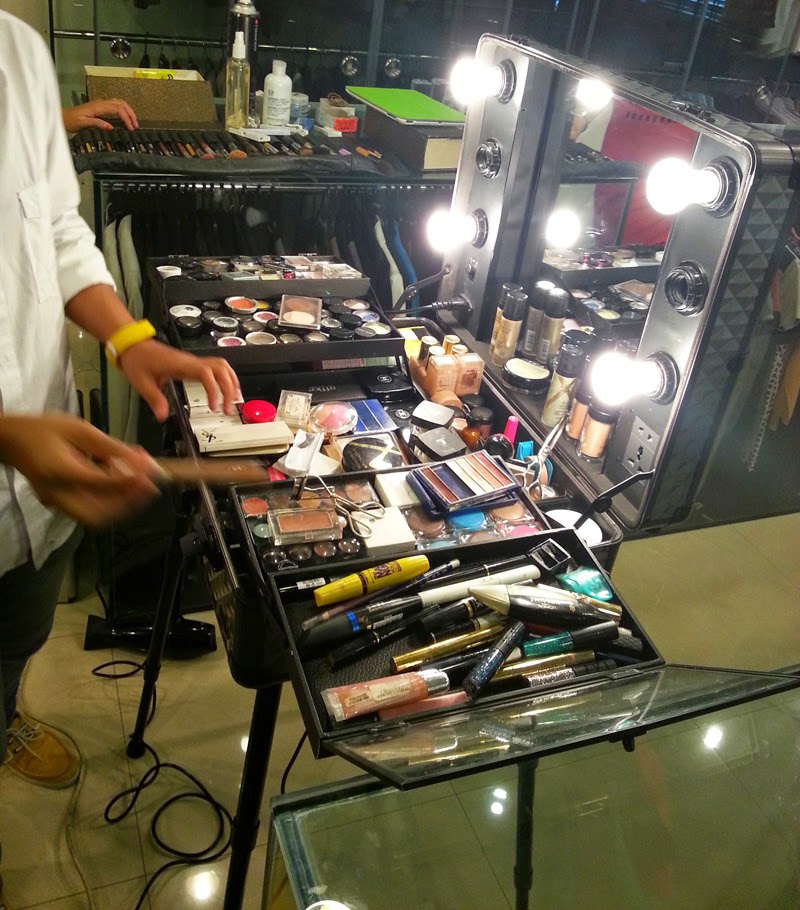 One of the days, we got a kind of makeup seminar to, like, refresh the anchors' overall look to be modern and sleek. The person whom in charge to teach us was Gusnaldi! I was so happy and too nervous to ask for pictures with him! So he thought us on a few anchors and then he let us to applied the freshed face makeup look to the others. I didn't get any model that day so I took pictures instead! I was like the official photographer for the class. Hahaha. And there you have it, a peek inside a pro makeup artist. I like to see makeup artists' kit because they will bring the best product they could have to work the magic. 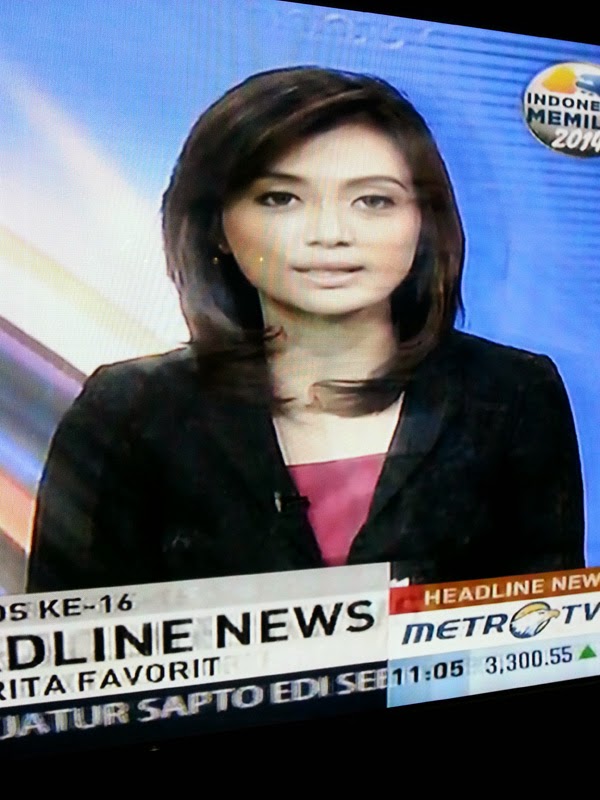 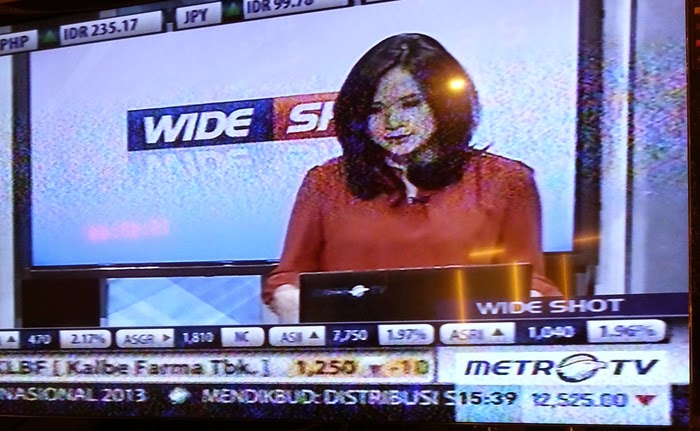 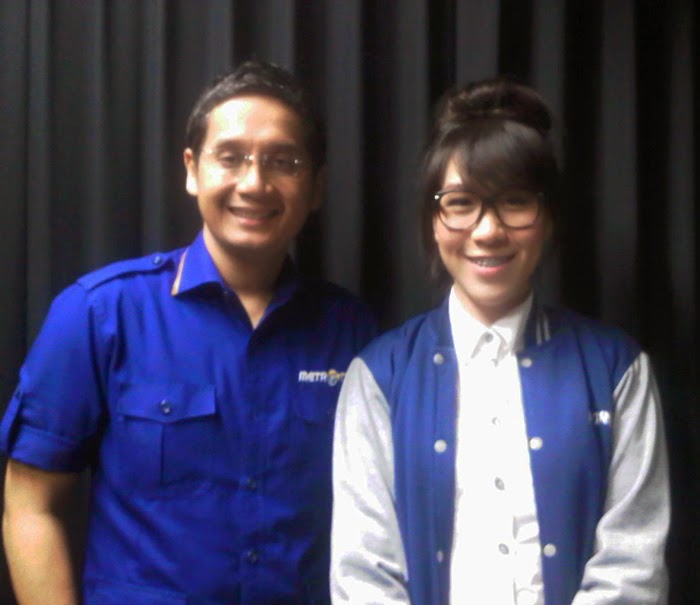 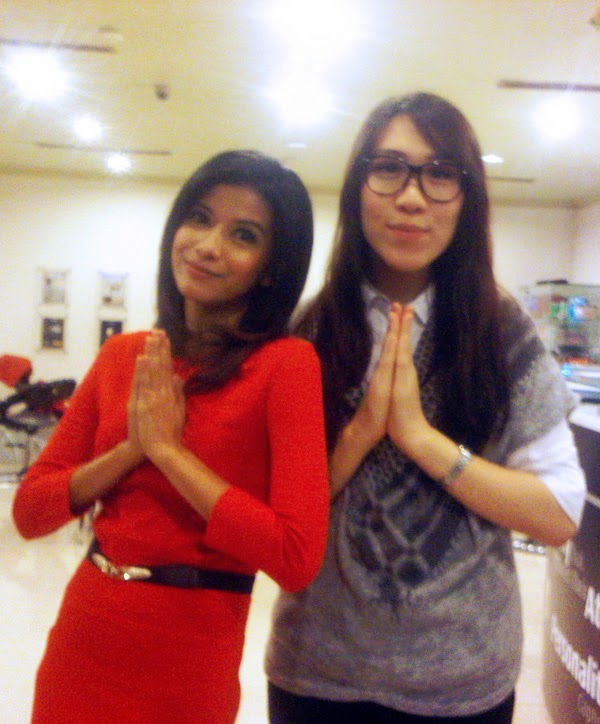 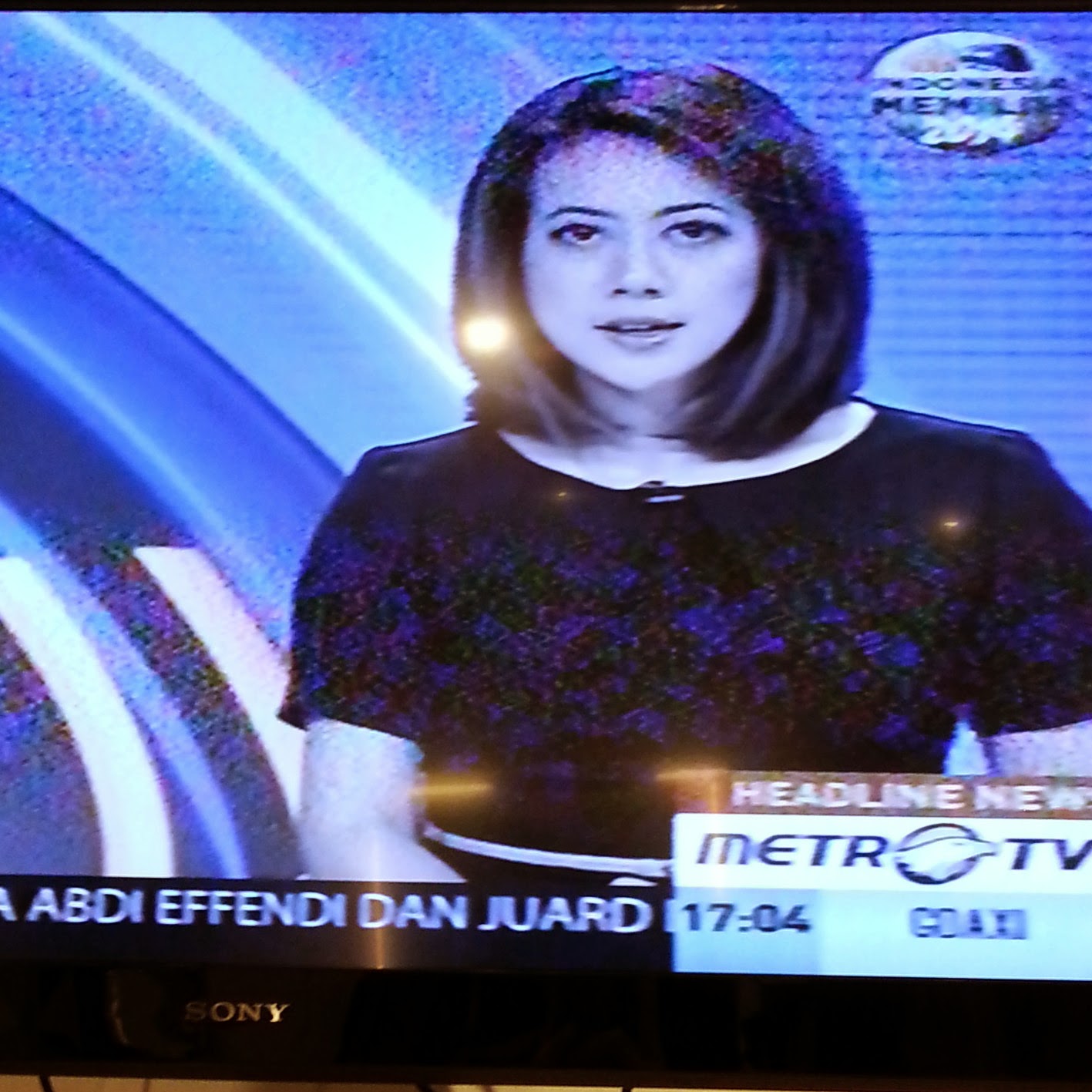 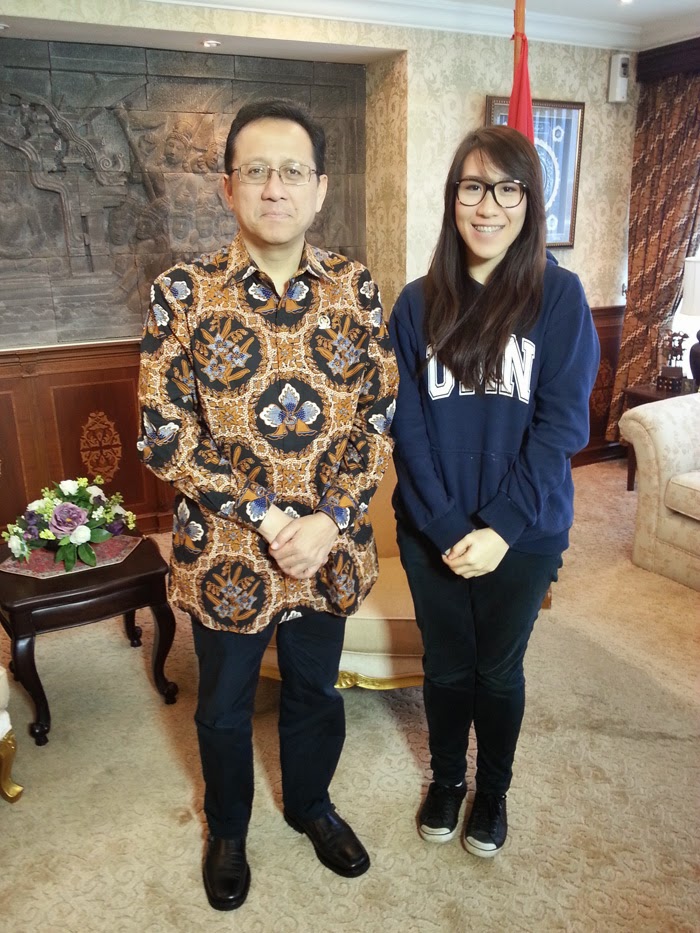 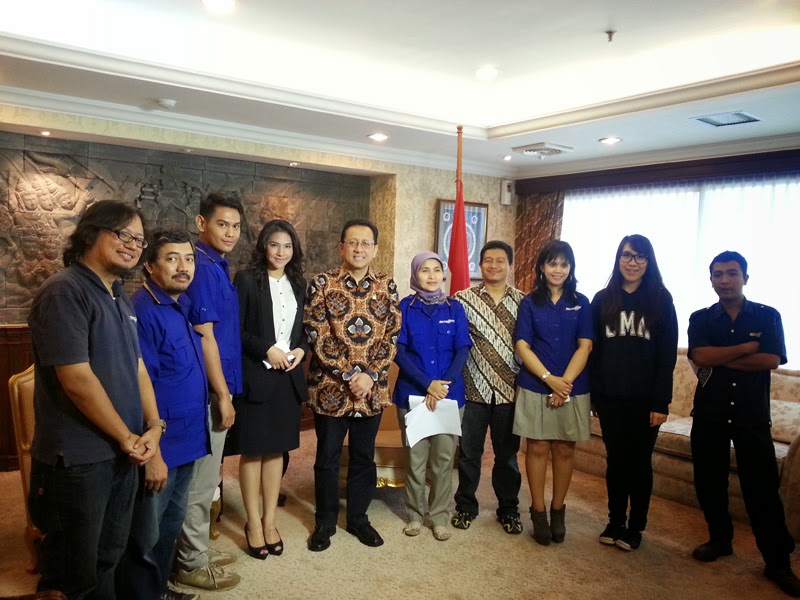 Some of the work I did. On the very top is Gilang Ayunda, The picture you are seeing is the first ever makeup I did at Metro Tv. And the producers and the team were liking Gilang's look. They said the makeup was nice and really suits Gilang's age. I was so happy. I was afraid that I'm good enough! On picture no. 2, 3, & 4 are Mbak Lucia Saharui, Bang Putra Nababan, & Mbak Zackia Arfan. These 3 were the most often people I did the makeup. Because they are so kind and not picky with who will do their makeup. Picture no. 5 is Mbak Zelda a.k.a My Boss! Hahaha. I was very afraid when I did her makeup, to be honest, she has a bitchy resting face although she's actually a nice & kind person. But being unconfident as I did, I felt like I'm under some pressure eventhough there aren't. The picture turns all blue-ish because I tried to portray the whole Metro Tv thing, you know. As the proof that my makeup get aired on national television! haha. Oh, and I've done Najwa Shihab's makeup once, too! She's so pretty, but prettier if seen on TV! Hahahaahha..

And the 2 last picts were with Mr. Irman Gusman, Ketua DPD RI. Whoa whoa whoa. Imagine me, an ordinary unspecial girl, doing nothing and being stupid as always suddenly get the chance to meet a very influential people like him? If it's not because of the right moment & the right place, this might never gonna happen. There are many political people we only see on the tv screen that I can actually met in real life. But I only recognize them once I've done with my internship, stupid me for not finding out earlier. XD

All in all I feel so blessed to have such an experience. Never in my life I thought I will have a chance to meet these people with my own eyes, let alone to do their makeup to appear on national television. I'm looking forward for what life got for me in the future. And I'll make sure if the next big thing happen in my life, I'll make the best out of it!